SKU#: SCRELG
Skip to the end of the images gallery
Skip to the beginning of the images gallery
SKU#: SCRELG
COUNTRY: NICARAGUA
WRAPPER: ECUADOR SUMATRA
WRAPPER: ECUADOR SUMATRA
BINDER: NICARAGUA
FILLER: NICARAGUA
STRENGTH: MEDIUM TO FULL
COLOR: NATURAL
COLOR: NATURAL
LENGTH: 6 1/4
LENGTH: 6 1/4
RING SIZE: 52
RING SIZE: 52
Add to Wish List Add to Compare
Details
Rated in the Best Cigar List in 2014 by Cigar Aficionado Magazine!
The San Cristobal Revelation – A rich blend with a perfect balance from the My Father Factory. It received an epic 92-rating and is the highest-rated cigar in the April 2014 issue of Cigar Aficionado!
Passionately handcrafted works of art are the sole purpose of which Ashton and The Garcia Family concluded to make one of the best cigars they have ever constructed. Originally introduced to the cigar world in 2007, San Cristobal has produced quality cigars over their short history. Now with the introduction of the San Cristobal Revelation, they will add another fine piece to their already stellar repertoire.

Now that they have garnered momentum, San Cristobal has added another thoroughbred to their burgeoning stable. It received an epic 92-rating and is the highest-rated cigar in the April 2014 issue of Cigar Aficionado. San Cristobal Revelation has been a best-seller since San Cristobal launched the brand just a few short months ago. These one of a kind masterpieces are handcrafted with passion and precision by Jose “Pepin” Garcia in Estelí, Nicaragua. The San Cristobal Revelation sports a lovely milk-chocolate hued Ecuador Sumatra Wrapper along with a rich, vibrant blend of skillfully aged Nicaraguan binder and filler tobaccos. A medium to full bodied experience, these cigars offer a rich, earth-flavored bouquet that invade the palate with decadent notes of leather, nuts, almonds, cedar, and spices.
The San Cristobal Revelation sports two beautiful bands on each cigar. The first band has the prominent San Cristobal logo in full glory, the second band right under has the cigar name “Revelation” pronounced. Both bands are coated in a gold shade with rich colors. These cigars come box pressed and presented wonderfully in their individual boxes of 24 or packs of 4.
The San Cristobal Revelation is one cigar that your smoking den and your humidor will definitely want to have around. They are the perfect blend of design and flavors that make up a combination you simply cannot be left without. Make no mistake about San Cristobal and the Revelation line, this cigar will make  its mark in today’s market.

This is what Cigar Aficionado had to say about being Rated in the Best Cigar List 2014
Ashton Distributors Inc. of Philadelphia created the San Cristobal brand in 2007, and it has been expanded several times over the years. Revelation, which hit the market in 2013, marks the third line in the portfolio, and is the newest version of the brand. San Cristobal Revelations are made with Ecuadoran Sumatra-seed wrappers that are harvested from the middle of a tobacco plant, which gives the wrapper on these cigars a fairly light color. The box-pressed cigars are streaky in appearance (fairly typical of cigars wrapped in this type of leaf) and they have a rich, sweet cocoa quality around a core of earthiness and a sweet vanilla-bean finish. This is yet another top-quality cigar from the Garcia and Ashton team. Credit: Cigar Aficionado Magazine
Reviews 1
Write Your Own Review
Questions
Ask a Question 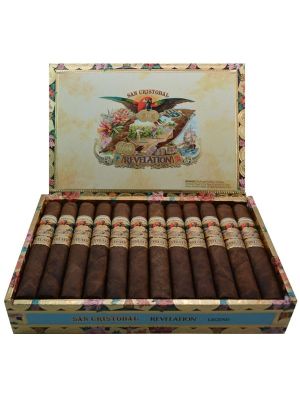 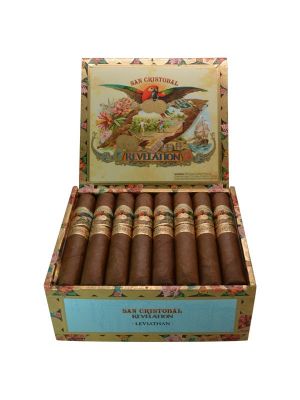 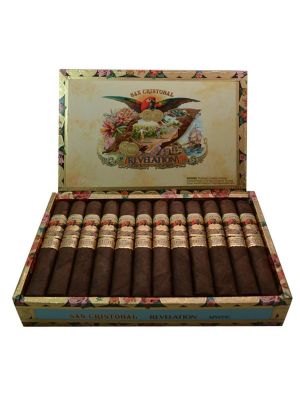 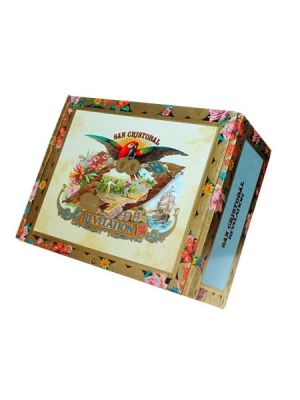 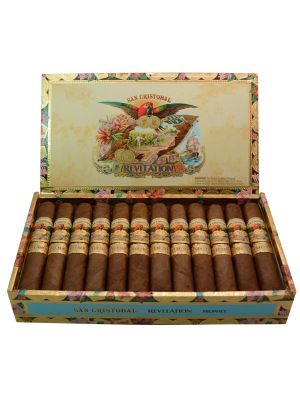 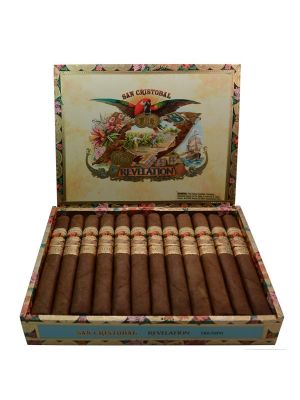