SKU#: NMC46
Skip to the end of the images gallery
Skip to the beginning of the images gallery
SKU#: NMC46
COUNTRY: NICARAGUA
WRAPPER: NICARAGUA
WRAPPER: NICARAGUA
BINDER: NICARAGUA
FILLER: NICARAGUA
STRENGTH: FULL
COLOR: COROJO
COLOR: COROJO
LENGTH: 6
LENGTH: 6
RING SIZE: 46
RING SIZE: 46
Add to Wish List Add to Compare
Details
When the Nestor Miranda Collection launched in 2014, it was lauded as a great way to celebrate the 25th anniversary of Miami Cigar & Company. Well 2 years later the Nestor Miranda Corojo was added as a to round off the collection that already contained Connecticut, Habano and Maduro blends!
Nestor has expressed his love for the Corojo leaf saying: "I love everything about the corojo; the appearance, the oiliness and the flavor,"calling it his favorite wrapper.
While the Corojo wrapper may have been the inspiration for the line update, it is also Nestor’s first line to feature a blend of all-Nicaraguan tobacco. Packaged in a sleek black box, the Nestor Miranda Corojo features notes of Hazlenut, Pepper, Coffee, Leather, Cinnamon, and Spice with a slight sweetness.
Reviews
Write Your Own Review
Questions
Ask a Question 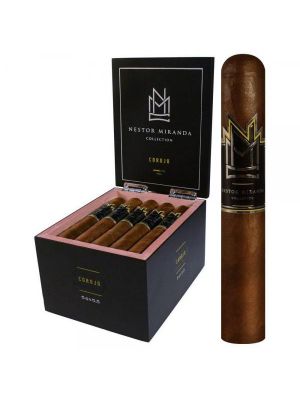