SKU#: GURORA
Skip to the end of the images gallery
Skip to the beginning of the images gallery
SKU#: GURORA
COUNTRY: HONDURAS
WRAPPER: ECUADOR
WRAPPER: ECUADOR
BINDER: ECUADOR
FILLER: DOMINICAN REPUBLIC, HONDURAS, NICARAGUA
STRENGTH: MEDIUM TO FULL
COLOR: NATURAL
COLOR: NATURAL
LENGTH: 5 1/2
LENGTH: 5 1/2
RING SIZE: 46
RING SIZE: 46
SHAPE: CORONA EXTRA
SHAPE: CORONA EXTRA
Add to Wish List Add to Compare
Details
The Gurkha Rogue is the third release under Gurkha’s East India Trading line. This one of a kind hand made cigar starts with a velvety smooth Ecuadorian Habano wrapper expertly layered over an ultra-rare Ecuadorian binder and a blend of 3-year-aged Nicaraguan, Honduran, and Dominican ligero long-fillers. The result is a full-flavored, full-bodied masterpiece for the senses that’s positively teeming with complexity. Expect punctuated notes of spice, red pepper, tobacco, roasted chestnuts, and earthy undertones that build slowly throughout the experience, culminating in a fantastic climax of flavors that stick around long after the embers die out. Using a carefully selected blend of tobaccos, Rogue is a bold, box-pressed cigar with a pronounced complexity and richness on the finish, beautifully constructed with an unfinished foot.

This storied brand is known as the Rolls Royce of Cigars, and for good reason. Kaizad Hansotia, the man behind Gurkha, spends huge amounts of time researching rare tobaccos and using his extraordinary skills to create the perfect blend. Many of these unique handmades feature ultra-rare tobaccos that are not easily found anywhere else, making them highly sought-after and full of tastes you’ve never experienced before. The Gurkha Rogue is no exception to their lines.
As with all of Gurkha’s cigars released under the East India Trading imprint, The Gurkha Rogue is a solid addition to include in their stock. A great all around cigar, with some complex flavors, and a smoke plume straight out of a chimney from start to finish. This cigar is paired well with a glass of whiskey or cognac and will definitely be a great after dinner cigar for those of you who are having a prime cut tonight. Just make sure that Porterhouse is cooked to your liking because this Gurkha Rogue will definitely keep your palate engaged for the rest of the night.
Reviews
Write Your Own Review
Questions
Ask a Question 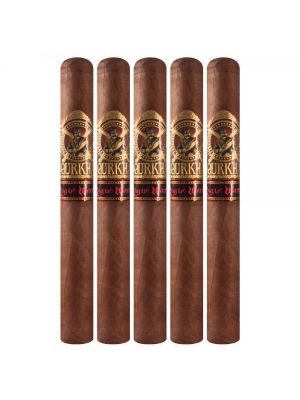