SKU#: CMRRO
Skip to the end of the images gallery
Skip to the beginning of the images gallery
SKU#: CMRRO
COUNTRY: HONDURAS
WRAPPER: HONDURAS
WRAPPER: HONDURAS
BINDER: HONDURAS
FILLER: HONDURAS
STRENGTH: FULL
COLOR: NATURAL
COLOR: NATURAL
LENGTH: 5
LENGTH: 5
RING SIZE: 50
RING SIZE: 50
SHAPE: ROBUSTO
SHAPE: ROBUSTO
Add to Wish List Add to Compare
Details
Recently receiving an outstanding 92-rating from Cigar Aficionado magazine in the April 2015 issue!This medium-body smoke has Camacho written all over it. Their Criollo leaf sees extra sunrays - so it packs an extra pop of spice to compliment a mellow sweetness. A true Camacho that's also at home uptown.The Camacho Criollo Series – Full flavor without the full throtle.
The Camacho Criollo Series is a medium bodied smoke with all the flavor you would expect from a premium Camacho cigar but at a new low price. With the acquisition of Camacho, Davidoff has revamped this cigar line for the 21st century, still keeping the same tradition that makes a Camacho, a Camacho but injecting new life into their already stellar lineup of cigars.
Camacho has always been regarded as a brand of cigars that has always rivaled that of the Cuban cigars, both past and present lines. This Camacho Criollo is no exception to the game, it sports a Honduran-grown, fourth priming wrapper which has a unique, peppery flavored punch. The leaves are left on the bush for a prolonged period of time exposing them to the suns rays to give it that unique kick, allowing those extra pops of spice to complement its very subtle hints of sweetness. While this Camacho Criollo has dialed back a degree in intensity, it delivers a powerful explosion of signature Camacho taste into every draw. Make no mistake; what you hold in your hand is a Camacho Premium Criollo Cigar.
Taking the Camacho Criollo to the next plateau are the Dominican-grown Piloto Cubano fillers that have been added to compliment the Honduran-grown wrappers. Giving this new kid on the block a balanced and well-rounded temperament. The Criollo leaf is intense in spice, but combined with the Piloto Cubano it helps the palette of even the most seasoned cigar aficionado ignite the sweetness receptors, giving you that smooth yet noticeable taste in every draw. The binder for this Camacho Criollo is an authentic Corojo, making the end result a mid-intensity cigar with an extra pop of different flavors to give you a great smoke with an uptown feel.
The train doesn’t stop there, these premium Camacho Criollo cigars come in a sleek and modern redesigned coffin. Yellow glossy accents surround the edges of this new look case with a felt underbelly, no more scratching your smoking den table anymore. The top is a high gloss black finish with the new Camacho logo and scorpion which is laser cut and imprinted on the top, making this a mean box of cigars for your already stellar repertoire. Have this box at your side and everyone will know you mean business!
Order your box today at Mike’s Cigars and take advantage of this new age of Camacho cigars at a low premium price!
Camacho - Built Bold
Reviews 1
Write Your Own Review
Questions
Ask a Question 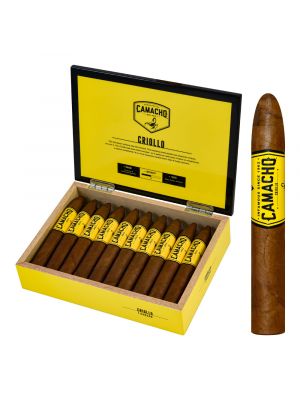 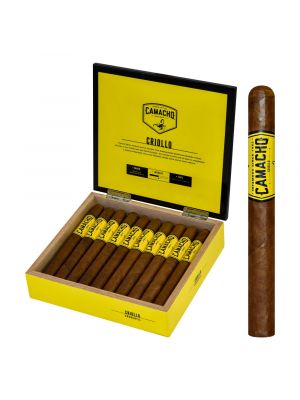 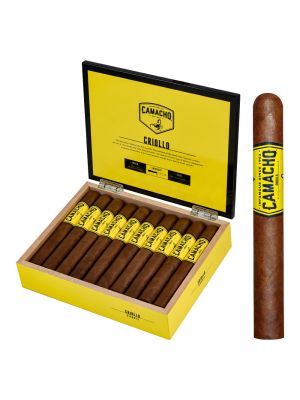 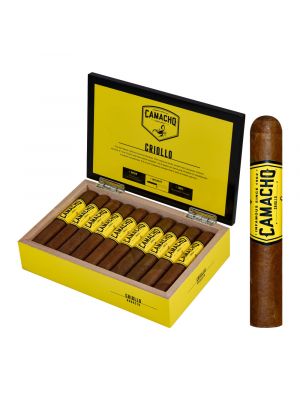 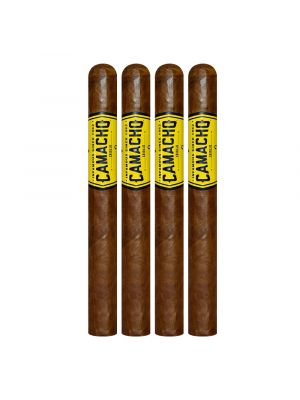 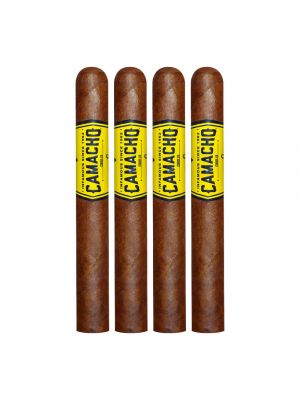